This week, my teammates at Meteor tracked down a surprising JavaScript memory leak. I searched the web for variations on javascript closure memory leak and came up with nothing relevant, so maybe this is a relatively unknown issue. (Most of what you find for that query talks about the bad garbage collection algorithm in old versions of IE, but this problem affects even my current Chrome install!) UPDATE: Vyacheslav Egorov pointed me at his excellent post on this subject with more detailed examples, better pictures, and knowledge of V8 internals. Definitely adding his blog to my Feedly. Also, there’s a great paper about this issue with an optimal implementation, though not in the context of JavaScript.

JavaScript is secretly a functional programming language, and its functions are closures: function objects get access to variables defined in their enclosing scope, even when that scope is finished. Local variables which are captured by a closure are garbage collected once the function they are defined in has finished and all functions defined inside their scope are themselves GCed.

Every second, we’ll execute the run function. It will allocate a giant string, create a closure that uses it, invoke the closure, and return. After it returns, the closure can be garbage collected, and so can str, since nothing remains that refers to it.

But what if we had a closure that outlasted run?

Every second, run allocates a giant string, and starts an interval that logs something 10 times a second. logIt does last forever, and str is in its lexical scope, so this could be a memory leak! Fortunately, JavaScript implementations (or at least current Chrome) are smart enough to notice that str isn’t used in logIt, so it’s not put into logIt’s lexical environment, and it’s OK to GC the big string once run finishes.

Open up the Timeline tab in your Chrome Developer Tools, switch to the Memory view, and hit record:

Looks like we’re using an extra megabyte every second! And even clicking the garbage can icon to force a manual GC doesn’t help. So it looks like we are leaking str.

But isn’t this just the same situation as before? str is only referenced in the main body of run, and in doSomethingWithStr. doSomethingWithStr itself gets cleaned up once run ends… the only thing from run that escapes is the second closure, logIt. And logIt doesn’t refer to str at all!

So even though there’s no way for any code to ever refer to str again, it never gets garbage collected! Why? Well, the typical way that closures are implemented is that every function object has a link to a dictionary-style object representing its lexical scope. If both functions defined inside run actually used str, it would be important that they both get the same object, even if str gets assigned to over and over, so both functions share the same lexical environment. Now, Chrome’s V8 JavaScript engine is apparently smart enough to keep variables out of the lexical environment if they aren’t used by any closures: that’s why the first example doesn’t leak.

But as soon as a variable is used by any closure, it ends up in the lexical environment shared by all closures in that scope. And that can lead to memory leaks. 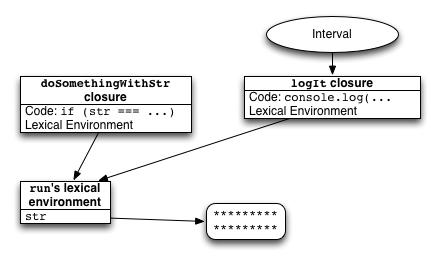 You could imagine a more clever implementation of lexical environments that avoids this problem. Each closure could have a dictionary containing only the variables which it actually reads and writes; the values in that dictionary would themselves be mutable cells that could be shared among the lexical environments of multiple closures. Based on my casual reading of the ECMAScript 5th Edition standard, this would be legitimate: its description of Lexical Environment describes them as being “purely specification mechanisms [which] need not correspond to any specific artefact of an ECMAScript implementation”. That said, this standard doesn’t actually contain the word “garbage” and only says the word “memory” once.

Fixing memory leaks of this form, once you notice them, is straightforward, as demonstrated by the fix to the Meteor bug. In the example above, it’s obvious that we’re intending to leak logIt itself, just not str. In the original Meteor bug, we didn’t intend to leak anything: we just wanted to replace an object with a new object and allow the previous version to be freed, like this:

So in summary: If you have a large object that is used by some closures, but not by any closures that you need to keep using, just make sure that the local variable no longer points to it once you’re done with it. Unfortunately, these bugs can be pretty subtle; it would be much better if JavaScript engines didn’t require you to have to think about them.